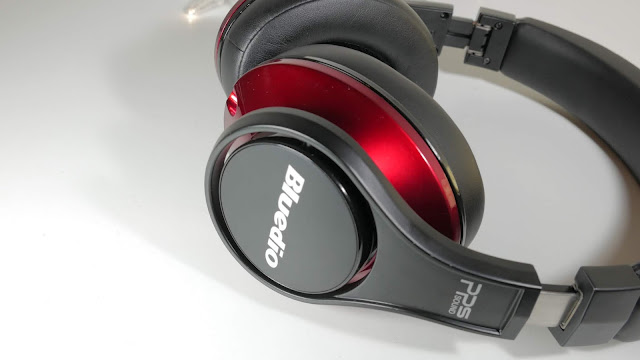 8 drivers in one headphone, a unique kind of beast. UFO from Bluedio, a brand name that is gaining in popularity. Because they are making a reputation in for making well constructed headphones without breaking the bank. So, how does this monstrosity sound, lets have a look. 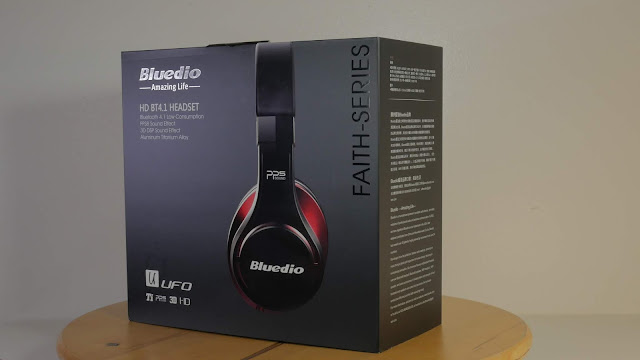 The packaging it comes in is well presented, that aims to give a good first impression. As we open there is the hard shell case. From the outside it is very nice. I would definitely note this as a value adding item. 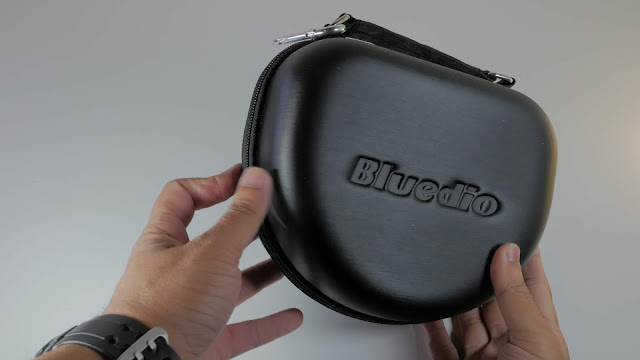 Inside we have the headphone folded and an elastic pocket that has the audio cable and the usb cord. On the headphone side there is moulded plastic base for the headphone to fit snug, perfectly. This can be removed if one feels like it. Now onto the headphone. I ordered the red and black edition, there are a few other colours available. 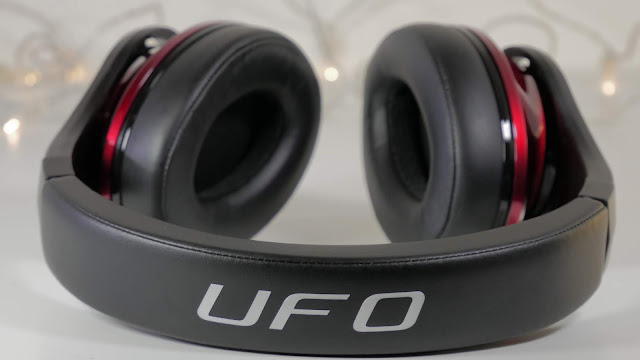 Styling, well, these things I tend to not comment about, if it is good looking or not is up to an individual to like. Build quality however, is decent. Everything that there is, is finished nicely, everything feels right. The ear cups are made using synthetic leather, but is nice and soft. The headband is also covered with the same material and is cushioned. The headband can be extended and there are nice clicks as the band extends by each step. While we are on the subject of the headband, it can not be permanently bent to ease on clamping force. 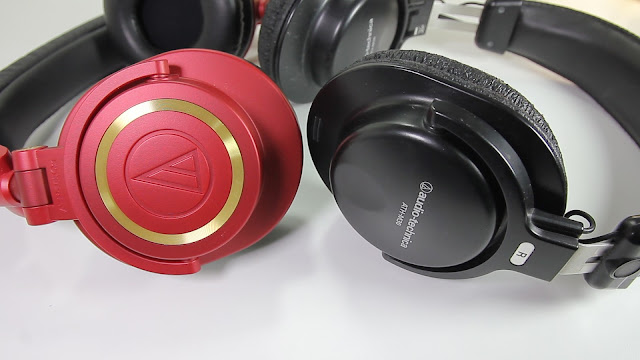 Example of this is the ATH-M50x we looked at earlier, where there is metal inside the cushion which can be permanently bent to loosen the clamping force. Having said that, the force in question is not unreasonable. I have used the headphone for about an hour, beyond that I felt like taking it off. Its not that I don't wear headphones for longer.
Numerous times I have worn the ATH-M30 for over 6 hours at a time to do a days work without any issues. M30 is however much lighter than the UFO.
The UFO without any cables weighs in at over 343 grams. Because of this weight the headband feels like its pressing on the head after an hour, a bit more cushioning could have solved it.The cups do swivel and rotate a little bit to manage a better fit. As far as the ear cups go.
The cushion is nice and soft and has a lot of give to it. The faux leather is nice and soft as well, and the overall setup here is nice and comfy. As far as circum-aural goes, it is not so completely. All these cushioning sits on the ear by most part. To give you an example, the AKG K52 has a large clearance allowing the cushion to completely stay clear of the ear and rests on the bony parts around the ear. I am stating these as a matter of fact, and maintain that wearing the UFO for about an hour, I have no issues with that.The left earcup has the audio jack port. If the headphone is off or is out of juice, you can use it with the audio cord provided. The headphone sounds very different if played via the cord or via Bluetooth.The right cup has the micro usb port, which is placed in an awkward position. This may prevent the headphones to be used while charging.
Not a big deal.Once powered on there is a voice notification that says power on and pairing or paired. The right earcup has the controls which works as they appear without any fuss. 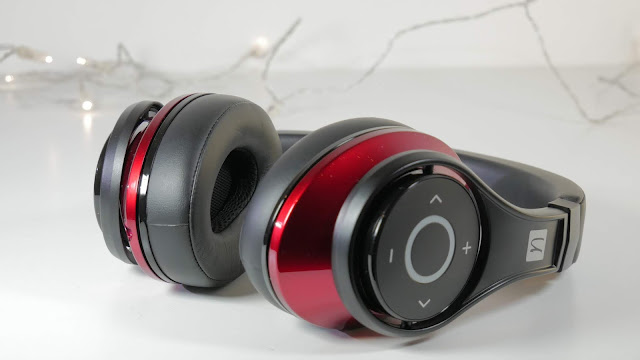 The only thing that I would have liked is that instead of the smooth flat surface if there were any dot or indent we could feel the position of the buttons. At times I ended up pressing the volume up button instead of next, etc. Again very minor thing.
Range: I have gone past 10 meters in direct line of sight without any issues. Going to the next room was ok as well, except moving around the house room after room, there are places it cuts off and that is to be expected. Now the main event. 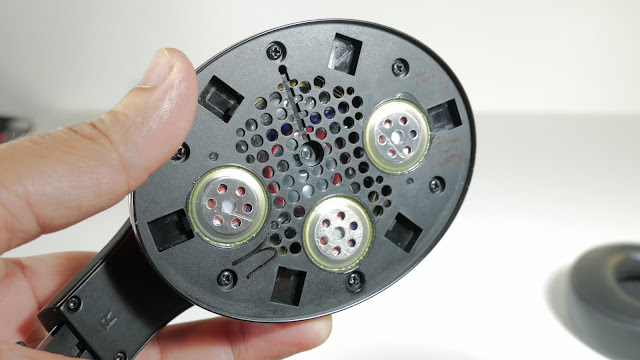 The sound.
Before I proceed further let us consider the image above. Behind the cushioning. There are three tweeters and behind that is a 50mm driver. That plays an important role as we will see shortly. When I first played the headphone, I could notice that the headphone was powerful.
Though I could not reach its limits with any kind of music that I played. Plus the upper mid was too sharp. I tried the DSP that the headphone came with and that does little for the sound. 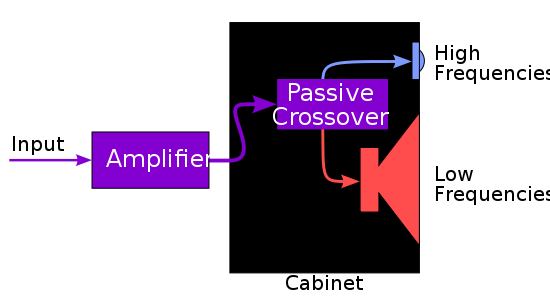 While there are many drivers in this headphone, they work more like 2.0 setup with passive crossover circuits. On that note, the amp on-board the headphone is certainly more powerful than the usual power of preamps in a phone.I was using Spotify and thought lets try to tweak the sound a bit. And yes, it started to punch nicely. But what Spotify does is if you increase one frequency up it lowers the overall volume to save you. Yes to save you, to protect you. So I tried something different.

VLC player does not do that, in fact you can equalize and increase the gain at the same time.
Result - eardrum bursting sound. No distortion, and no holding back. This is what subwoofer attached to your head feels like. This is vulgar display of power. The vibration is intense, like the earlobes were shaking. It beats the Beats studio in its own game. But I warn you, this much power is damaging to your ears. I have discussed noise induced hearing loss in a video once, and those warnings discussed there applies to this headphone very much. When I took the headphone off after listening to one song in this setup, my ears were ringing. As far as the sound profile goes, its certainly not flat, there is colouration and untuned as mentioned earlier the upper mid is too potent. Certainly for work purposes this is not right, the UFO is not meant for any monitoring task. Its for music or movies, etc.
For listening pleasure a bit of tweaking makes it come to life. You need to personalise your sound and to that end the strength of the main driver is an asset. But I’ll say this again, there is such a thing as too much power. Goodness gracious man. This is Dr Jakyl and Mr Hyde situation.Conclusion:Overall the UFO ticks a lot of boxes. The hard case is very nice, the build quality is reasonable but a bit on the heavy side. It is comfortable enough for about an hours use. The battery seems to last long, in fact I never charged it out of the box and after a week's worth of use. I have made phone calls with the headphone and it works, the caller could hear me
just fine.The sound after a bit of tweaking will please most individuals except may be the audiophiles who want the high resolution or pure rendition of source. And yet again,
if pushed, there is madness quantity of power on offer, this may sound enticing but may not be very good for you in the long run. And finally the price-tag, at under a $100 dollars, there is a lot on offer here. Like I said, Bludio does not break the bank.


This article has been adapted from our video review, enjoy:

December 24, 2015
The computer case market is a crowded space. Every manufacturer is attempting to gain attention by doing something differently. In that spirit In Win has come up with cases that uses tempered glass for panels as opposed to sheet metal with perspex windows. The result of using glass for case's surface most certainly brings about that unique feel. The panels are slightly smoked that adds a little bit of style. Overall as far as the case goes there are not too functional aspects that we have not seen before. The total airflow appears a bit positive pressure and all the exhaust work comes down to one 120mm fan at the back. So, what we have is a case that is aimed towards looking unique as opposed to being a performance powerhouse. A moderate build that is sufficient for a reception or office desk where it will be seen and admired is the idea. It certainly has its place in the case ecosystem, its just a matter of checking first if the product as a whole right for the i
11 comments
Read more