July 12, 2020
Automobiles have existed for many decades, and with every passing year they have been improving. This iterative development has brought us the advanced features that the modern cars offer. Likewise membrane keyboards have existed for a number of decades, with gradual improvements made to them as time passed by, and we have arrived at the Logitech MX keys. Is this the pinnacle, is this the height of what a membrane keyboard can be, that is the question I explored to answer. 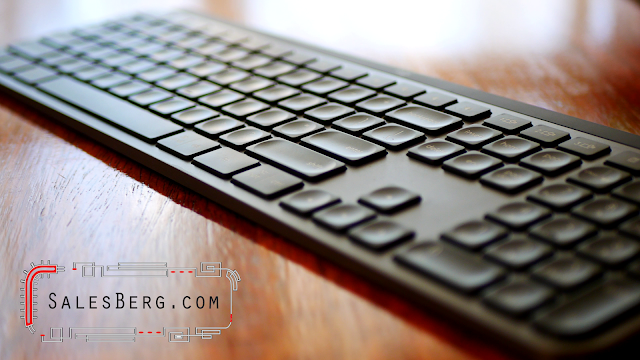 First let's cover the brief, why, why did I venture to purchase the Mx Keys. Well, with the recent pandemic, like many of us, I have been working from home. I have been juggling between my work laptop and my personal computer. So a multi-device keyboard was needed. The K345, while a reasonable keyboard was totally not suitable for the task. So to solve the problem I switched to using the K380. The K380 connects over Bluetooth and can connect to 3 devices. I originally used to carry that keyboard in my backpack suitable for use on the go, and it was brilliant for that. I say ‘was’, because, for my desk I still prefer the full format keyboard, and not having it was a compromise on efficiency, enough to matter. Now over at my wife’s desk there is a MK850. That is a full format keyboard, and is working brilliantly to address the multi device issue. But I can’t get that, because it is sold as a combo with the M720 mouse, and I already have that and don’t want another one. Paying a little extra I got the Mx Keys. We will talk more about the price points near the end and that is an important thing to talk about. Unboxing - Well, from the very get go, Logitech is aiming to present the Mx keys as the cream of the crop, the premium grade. The picture of the keyboard is printed in glossy finish while the box surface is satin. When we pull out the outer cover, we have the logo in gloss black and the rest in satin, black on black, kind of like modern art. Inside we have the keyboard wrapped in paper as opposed to plastic, nice touch there, and there is a box for accessories. In that box we have some paperwork, and a USB type c cable for charging. Normally I wouldn’t think twice about this, but even the cable is premium quality. Let us now talk about the properties of the keyboard itself. The first thing that I noticed is that it felt a lot heavier than most keyboards. Under the keyboard there are six rubber footings and that does appear to have the desired effect. My table top is a regular laminate surface, and the keyboard holds on to it effectively, there is no worries about it moving while we type on it. On the right corner we have the USB type c port and the power switch. As far as physical things go, what is missing is any kind of height adjustment mechanism. They have taken the one height fits all approach, this may not be ideal for some as far as ergonomic is concerned. Not all our hands are the same. 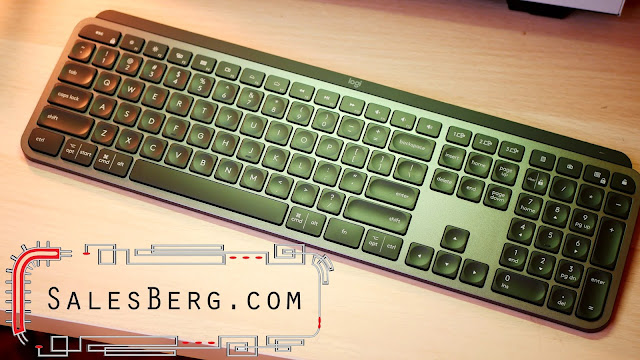 Looks wise, Logitech has toned things down to be as minimalistic in appearance as possible. Even their logo is shortened and dimmed down. Nothing screams, nothing in particular is asking for attention. I like minimalism, this is the new celebration. Now to the business of the keys themselves. As mentioned earlier, the layout is standard ANSI, and this is a big consideration for me, and those who rely on muscle memory for typing, if the layout was non standard I would not have purchased it. The keyboard is also sold in ISO format in some other parts of the world, you may want to pay attention to this at the time of purchasing, as I have found the Logitech website itself displaying the two formats in the same page, which can easily lead to confusions. There are 4 additional buttons for calculator, camera, menu and lock computer. In the K850 these were accessible via function key, I’m glad to see dedicated keys for them and without compromising the overall layout of the keyboard. The keys are back-lit, and it lights up if we bring our hands over it, without even touching it. Logitech has used proximity sensors for this purpose. The prints on the keys are not really prints as such, they are translucent plastic, so the alphabets themselves light up. A lot of back-lit keyboards don't go this far. Next is the key press. The keys surface has a concave curve inwards that has a very distinct feel under the finger tips. As if it guides the finger towards the center of the keys, most certainly I’ll call it a positive. The keys are to a great extent wobble free, meaning even if we hit the edge of the keys, it travels down straight. I personally am not a fan of low profile keys. This is partly due to the fact that a lot of low profile keyboards lack adequate tactile feedback and felt squishy like a sponge. That is not the case here, apart from the correct vertical travel, the keys also have appropriate feedback that tells us the button has been pressed. There is a sharp and distinct end to the key travel, and all this is consistent from the largest key the space-bar to the smaller keys. Logitech claims the surface of the keys themselves has some kind of matte coating. And yes, I feel that too, and I have spent time side by side with other keyboards, this really does feel different. The culmination of all this together makes for a great typing experience, even though it's low profile.
To contrast, even though the MK850 in layout was very similar to this and despite the fact that it had near full height keys, the Mx Keys wins over because how far Logitech has managed to refine the keys, be it membrane keys, the typing experience is hands down better. It makes less noise as we type as well, let's have a demonstration. Apart from the physical aspects, Logitech Options software is most certainly a value add. It allows the keyboard to be further customized. The Logitech flow allows the keyboard and various mice from Logitech to operate between multiple devices seamlessly. With the Back-light turned on, it does run for about 10 days then runs low on charge, then the light stops turning on, and every now and then the power led will flash red. But the keyboard continues to work. How many more days, I’m not sure, it has not died completely on me so far, it has been about 20 additional days without charge. This prompts me to think about a particular issue about inbuilt Li Ion battery, that running it totally flat is not all that good for it. And when that battery dies (develops permanent fault), the keyboard is done for. As opposed to this, the K850 has replaceable battery. Why not do the same with this. The base has taken enough room to house 4 aa rechargeable batteries. That way we can swap them at lower cost and could have lower the price of the keyboard itself.
Now I’ll discuss the price points. In Amazon the Mx Keys are going for about US $127 in Australia it's retailing at about $200 Australian. While the Mk850 Keyboard and mouse combo is about $100 and in Australia they are retailing for about $150 to $160 Australian. It seems that there is a pretty large gap in price points. The Mk850 is shipping with a mouse that itself sells for half the price of the MK850 combo. This is something that I have had problems with Logitech before as well. Price Points. They ask for a premium, simply because they can. The keyboard itself is great don't get me wrong, but Logitech has spent money on things like proximity sensors, Li-ion Battery, and such, so that they can, what, jack up the price? I can honestly say that I am left with a feeling that I do not see my $200 worth in this, although I admire the keyboard for what it is.
The Mx Keys may be out of budget for a lot of people, but those who want a great keyboard, or can charge it to the company account because they are setting up their work from home station or something, this is a nice thing to have. Price tag apart, the Mx Keys is certainly a segment leader, and has raised the bar.
This article has also been published in video format: