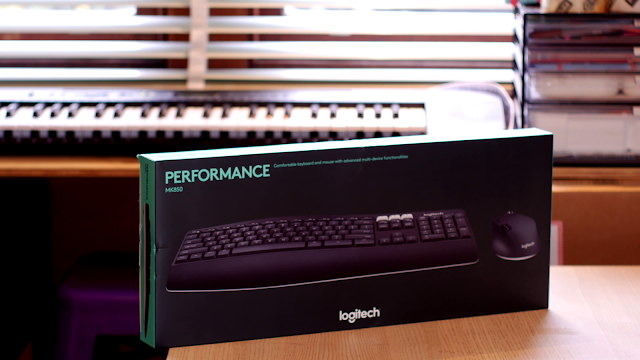 Earlier we looked at the Logitech M720 mouse on it's own, and there were lots of good notes about it's design.

In this article we are going to be looking at the MK850 which comes bundled with the M720 mouse and a K850 Keyboard. Taking two products and calling them combo alone is not enough, they need to work as a team, complementing each other. We shall be exploring how successful this combo really is.

So earlier when we looked at the M720 mouse, I covered a lot of topics I’ll not repeat those in this article but I’ll summarize, for details by all means check out the video above. My words at the time was that things have been simplified. And I mean that in a good way, simplification is not easily achieved. So after using the mouse for about a year what are my thoughts, well, I have customized the mouse in the following way, scroll wheel tilt left for copy and right for paste. The two thumb buttons for volume up and down and the bottom thumb button for alt tab. These are some of the most common actions I generally perform. The mouse itself with the matt rubber surface is moved around rather easily. The combination of the physical button arrangement and the physical shape of the mouse is so successful that I do not have to think about the mouse in a conscious way. I focus on the task, weather I want to copy and paste or do something on the screen, the mouse is almost forgotten, out of mind yet it's under my palm, the mouse exists if you ask me about it. The focus is on the screen in front of me, on the work.

So to sum it all up, as far as job description for the mouse goes, it really is a success story. 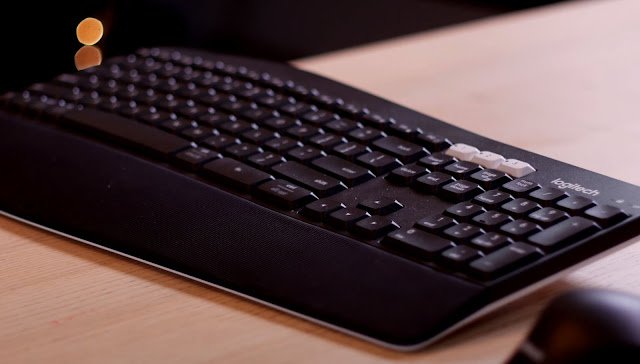 Now on to the keyboard. Just like the M720 mouse was a successor to the M705 mouse. The Keyboard is the iteration of the MK700 Keyboard. I did use that keyboard a number of years ago. It was not a bad keyboard, but the low profile keys were not to my liking. I personally prefer standard ANSI layout and standard key height and stroke travel. The K850 also has somewhat low profile keys, but it's not as low as the previous model. Let's call it lower profile, but it feels rather close to standard key height and standard key travel distance. This is important if you type looking at the screen relying completely on muscle memory. Now further to that it does appears that they have tweaked the shape of the individual keys as well and given a slight curve to the keyboard itself. The overall effect to me was not necessarily plus nor minus, but my wife who uses the keyboard said that this is an improvement. Her previous keyboard was a Logitech G110. She does not play games but rather for office works her sentiment is that this is an ergonomic improvement overall. This I agree to as well. Because of the wrist rest. I have reviewed keyboards with wrist rest, mostly it's a piece of plastic either as a part of the body of the keyboard or removable. 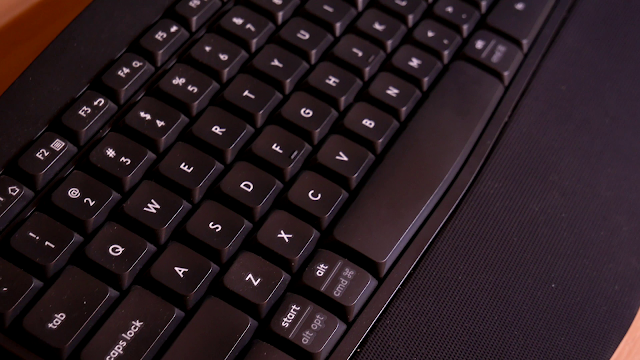 This here Logitech has put some thought into it. Now it's not much to look at, visually nothing is popping out. But when you feel it, the surface is slightly rubberized, very similar to how the mouse surface feels. There Is also a little bit of cushioning, very mildly, slightly, but just enough that when you place your wrist on them, you know the difference between a hard plastic wrist rest and this. This is in line with Logitech's trend towards making things that perhaps look wise may not be as decorative, but you will use these objects for hours at a time, day after day, month after month, and in that long term it will be it's dividends in terms of ease of use.

To make life just a little bit easier, Logitech ships the product with batteries included, they have been doing this for most of their products, which makes them ready to use out of the box. Also on that note, Logitech has nailed the game of long battery life. Even the K380 that we looked at 2017 still has the original batteries it came with and works perfectly. Logitech is claiming 3 years battery for keyboard and 2 years for the mouse, given the track record, it’ll probably last longer, even for a heavy user like myself. So zero concerns on the battery department.

So, in isolation, the mouse and the keyboard has a rather positive outlook. Now to explore if the two works together. Both the mouse and keyboard works over Bluetooth or with Logitech's unifying receiver. Both the mouse and the keyboard can switch between devices by the press of a button. And in that sense, they are well paired. The MK850 set that we have, in a day to day basis it is serving two computers side by side and seamlessly switches between the two. The two side by side also feels like they are satisfying the same design brief. That is no need to look flashy, just be comfortable to use on a day to day basis, have similar surfaces, serve multiple devices with ease of switching between them. And it does all this, no problems.

At this point in time the combo is selling in Amazon for about 71 dollars, or perhaps lower.

There are a lot of competition at this price point, however, as far as reputation and earned track record there are few that may match up to the name of Logitech. If the price is within your budget, the MK850 should certainly be taken seriously as it sets out to do a few simple things, and it does them well.