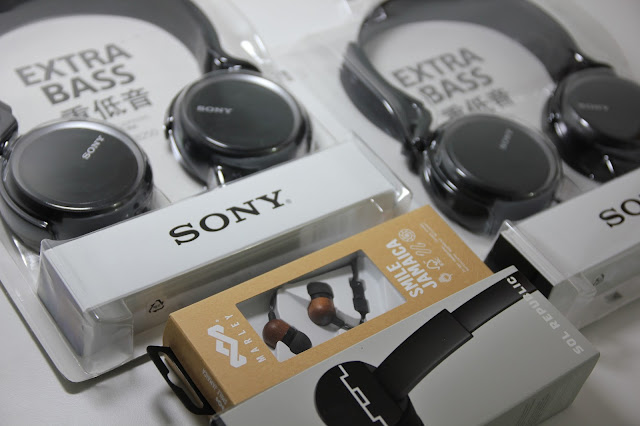 Giveaway
This month we are giving away earphones and headphones. To participate all you have to do is subscribe to our YouTube Channel and leave a comment on the Giveaway #1 video about which product you would like to receive.
The products are:
The link to the video:
https://www.youtube.com/watch?v=U3xAEb0ywJA

1. Eligibility: The March Giveaway is open only to residents of Countries, States/Territories or any place where the participant can legally participate in such giveaway. Participant must be over the age of 18 at the time of participating. The entry will be considered void if there is any contradiction of any applicable law.
2. Prize: The Giveaway allows Entrants to enter random drawings, as described below, on the Salesberg YouTube Channel for a chance at winning headphones and earphones as described on the Giveaway Video. The average retail value (“ARV”) of the Prize is AUD37. The total ARV of all Prizes is AUD164. Any applicable tax or duty is sole responsibility of the participant. THE ODDS OF WINNING THE PRIZE DEPENDS ON THE TOTAL NUMBER OF ELIGIBLE ENTRIES RECEIVED.
The Winner will be solely responsible for all federal, state and/or local taxes, and for any other fees or costs associated with the Prize received.
3. Giveaway Period: The Giveaway shall begin on Feb 26, 2018 and shall end at 15th March 2018.
4. How to Enter: To enter the Giveaway you must (a) subscribe to the Channel, (b) leave a comment on the March Giveaway video stating which of the three items is desired.
5. Winning:  The winner of the giveaway will be announced on 16th of March 2018 on Twitter, Facebook, Salesberg.com website and on YouTube.
6. Prize Claim: The winner will be sent a message upon selection. The failure to respond timely or to provide information for postage or other request to comply with the terms may forfeit the winning. If a Prize goes unclaimed or is forfeited by the Winner, the Prize may not be re-awarded.
7. Rights of Sponsor: We have the right, at our sole and absolute discretion to refuse any Entry whatsoever made by Entrants which it finds to be in violation of these Rules or which it finds in its sole discretion to be otherwise objectionable for any reason mentioned in this document or otherwise.
8. YouTube Policies
a)     Your participation in and entry into this giveaway must be in compliance with YouTube’s own Community Guidelines. Entries which don’t comply with YouTube’s Community Guidelines will be disqualified.
b)     YouTube is not a sponsor of this Giveaway. By entering this Giveaway, you release YouTube from any and all liability related to this Giveaway.
9. Manufacturer & warranty: None of the manufacturers whose products are included in this giveaway are sponsors of this giveaway or involved in any manner. If there is any warranty claim to be made, it is up to the manufacturer to provide such service should they wish to or they may refuse. Salesberg.com is not liable to provide any warranty or guarantee for the products.
10. Privacy:
·       Participant is not required to tell their real identity
·       The winners will be announced publicly using their YouTube screen name as it appears publicly. The same announcement will also be made on other social media pages and on our website.
·       Winner of the giveaway will be required to provide a valid address for the parcel to be sent to. The information will be kept private and may only be released to law enforcement agency or other entity that is able to demand such information legally and only when such demand is made.

Special thanks to Lior Leser

Earphone Battle - Apple vs Pixel vs Sony vs Samsung vs LG - Which is the best?

October 01, 2017
In this article we have a battle of the earphones that comes with our mobile. We pin five of the heavy weights of the industry against each other, lets we who surfaces victorious. (This article reflects information and items present up to January 2017)

A bit of background. Almost every flagship phone these days brings with them earphones. Traditionally they mostly used to be mediocre. So we often left them in the box in favor of something better or others were just not bothered about earphone’s quality so long as they worked. It is difficult to deduce the percentage of unused earphones, but we have some figures. Approximate sales of smartphones for the year 2015 was 1.4 billion units and on average an earphone weighs about 13 grams. Give or take a little all these earphones would weigh about 18,200 tonnes.To put that in perspective thats like 40 Airbus A380s.


Why this is a big deal is that, a massive percentage of all these earphones will never get used and will end up in landfill, how ma…
2 comments
Read more

March 12, 2019
As usual Samsung released their new line up of mobile phones with great publicity and frenzy of coverage. While most attention is granted towards the phone, the accessories are often left on the sideline because there is nothing new to see there, or so we thought was the case.

The pattern is that every two models, Samsung has been updating their included earphones. Meaning, the S4 and S5 had these somewhat decent in canal earphones that were presentable for it's time. Then in S6 and S7 series Samsung went into a slightly different direction with their design and that was either loved or hated by users.
Then with great fanfare, the S8 and S9 series had the AKG Tuned earphones. There was a bit of controversy due to the way Samsung announced these earphones, it came across as AKG was making the earphones, but they only tuned it, they did not manufacture it. The common complaint was that the earphones were a bit of a let down in the bass section.
Now with the history out of the way w…
5 comments
Read more

December 24, 2015
The computer case market is a crowded space. Every manufacturer is attempting to gain attention by doing something differently.
In that spirit In Win has come up with cases that uses tempered glass for panels as opposed to sheet metal with perspex windows.
The result of using glass for case's surface most certainly brings about that unique feel.
The panels are slightly smoked that adds a little bit of style.
Overall as far as the case goes there are not too functional aspects that we have not seen before.
The total airflow appears a bit positive pressure and all the exhaust work comes down to one 120mm fan at the back.


So, what we have is a case that is aimed towards looking unique as opposed to being a performance powerhouse.
A moderate build that is sufficient for a reception or office desk where it will be seen and admired is the idea.
It certainly has its place in the case ecosystem, its just a matter of checking first if the product as a whole right for the intended purpos…
13 comments
Read more